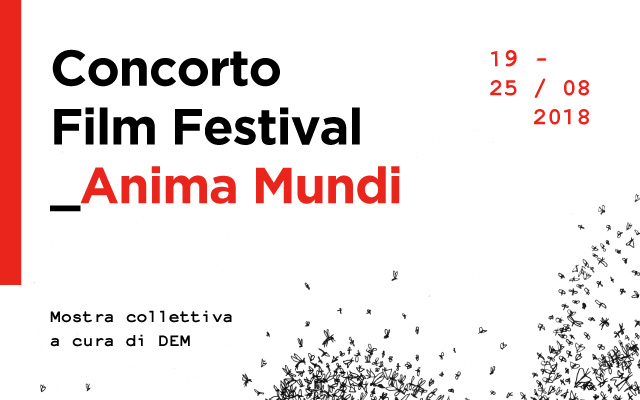 By Concorto9 August 2018No Comments

August 19-25, Palazzo Ghizzoni Nasalli
Curated by DEM
For a long time Concorto Film Festival has been entrusting the festival posters to a different visual artist every year, who is asked to render through his/her own artistic sensibility the festival image, which is the flying donkey. This collaboration resulted in a quiet peculiar bestiary, populated by multiform equines, each with its own characteristics: one flies with angel wings, one it’s carried by a zeppelin, one stands with its feet firmly on the ground and another one floats only with its mind.
The last poster in time order is that of 2018, carried out by Silvia Idili, very talented artist and illustrator. By the wish to highlight Silvia’s art and to bring together her style and the one of the artists who have been working on Concorto poster over the years, was born out the idea of an iconographic exhibition which will collect the works of several illustrators of past years. A dialogue between forms ad interpretations, expressed in accordance with the artistic vision of every one and almost resulted in a “bestiary” in which the shapes of nature are seen through the imaginative and cultural filter of the involved artists. An exhibition that, like a kaleidoscop of forms and suggestions, shows us how “there are more things in heaven and earth, Horatio, than are dreamt of in your philosophy”.
Hence the title “Anima mundi”, a term used to describe the vitality of nature as a whole, treated as a single living organism. This is the unifying principle, from which the individual organisms take shape. They not merely organize and differ one from each other according to their individual specificities, but also are related to a common universal soul.
“From this discussion it becomes perfectly clear that the individual member of the All contributes to that All in the degree of its kind and condition; thus it acts and is acted upon. In any particular animal each of the limbs and organs, in the measure of its kind and purpose, aids the entire being by service performed and counts in rank and utility: it gives what is in it its gift and takes from its fellows in the degree of receptive power belonging to its kind.” Plotinus
The artworks on display range from painting and engraving to pen-and-ink drawing and colour design. “Anima Mundi” is set up by DEM, world-class visual artist (author of the 2014 poster), and involves Silvia Idili (2018 poster) and Hitnes (2017 poster). The exhibition will take place from 19 to 25 August 2018 in Piacenza, in the garden of Palazzo Ghizzoni Nasalli, during the 17th edition of Concorto Film Festival.