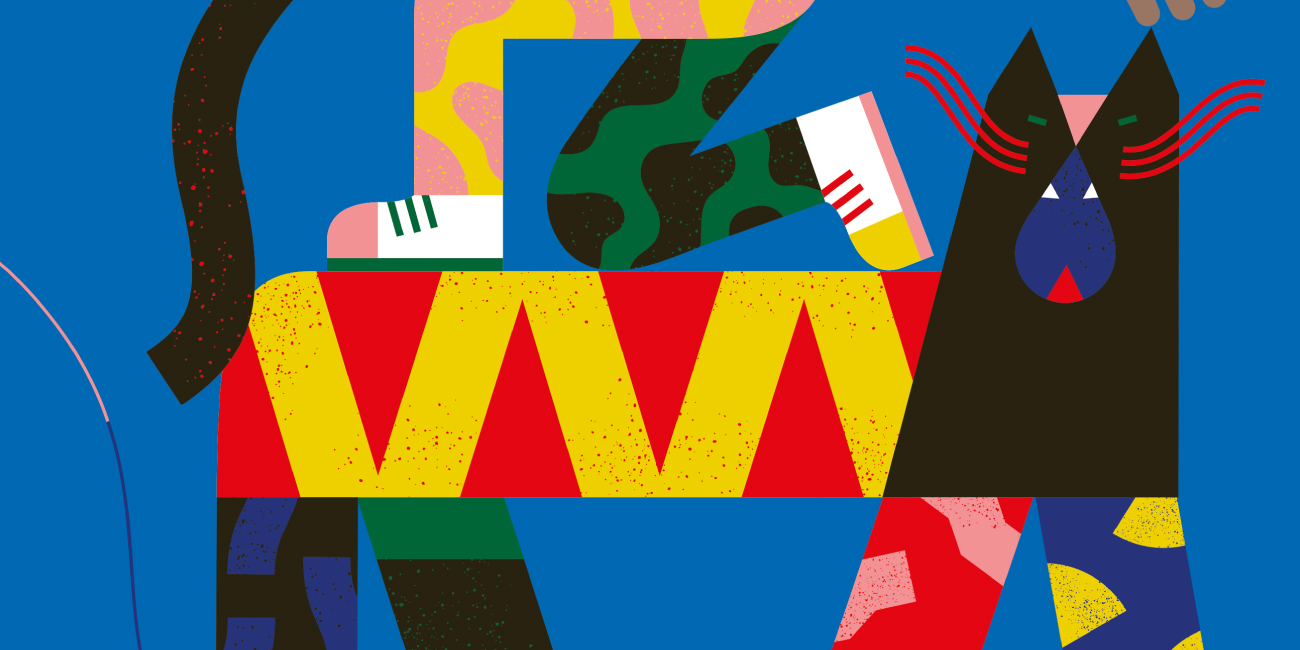 By Concorto12 August 2021No Comments

From August 22 to August 28 Concorto Film Festival is glad to be hosting the solo exhibition of Camilla Falsini, artist, illustrator, and author of the 2021 festival poster.

During the Middle Ages, the most powerful sovereigns, such as Frederick II (aka stupor mundi, the wonder of the world), used to, when they travelled, to do so together with a travelling circus with extraordinary and very rare animals: camels, falcons, lions, panthers, elephants, bears and so on made up the personal royal menagerie and had to be housed, fed and taken care of everywhere where the sovereign travelled.
Even though we may consider this custom eccentric, it actually served two practical and well-defined purposes: first of all, the menagerie proved how powerful the king was. The more powerful one was, the more beasts one owned, animals that embodied the monarch’s worth (the lion represented his strength, the falcon his wealth, the camel his faith, and so on). Secondly, the menagerie reassured the king, in fact, it was as if a part of his realm was travelling with him, giving him enough confidence to face the inevitable diplomatic discussions that awaited him.

Mutatis mutandis,(“having changed what needs to be changed”): it was while thinking about the second purpose that we came up with the idea of setting up CARAVANSERRAGLIO. In fact, during these hard and unpredictable times, Camilla Falsini’s big and small beasts, with their bright colours and playful, almost primitive shapes and with their hieratic and sly figures, give us light and comfort, making the confrontation with reality, that is something too complex and harsh, lighter.

Quoting Falsini:“I think that lightness (intended as the “subtraction of weight” about which Calvino wrote in his Six Memos for the Next Millennium) is “a value rather than a defect”, especially during this odd period, and is something that we should never confuse with superficiality. To quote Calvino once again, only Perseus, a light hero with his winged sandals, can defeat Medusa, the Gorgon who, as opposed to him, turns everything into stone and whose blood gives birth to “a winged horse, Pegasus. The heaviness of stone is transformed into its opposite”. Art (visual, literature, etc.), making us observe the world without being overwhelmed by it, saves us from turning into stone”.

So, we are waiting to meet you in the neo-Gothic greenhouse of Parco Raggio, a building made of glass and very thin steel, a combination of lightness and architectural energy that will add even more value to Falsini’s works thanks to the setting up and lighting of Davide Giacobbi, theatrical and exterior designer.

CAMILLA FALSINI
Camilla Falsini was born in Rome, where she lives and works.
Typical of her are the clean lines, stylized shapes, and strong, minimal colours. Her works range from editorial illustrations to large wall paintings, from pieces of design to books.
After classical studies and after graduating in Illustration (IED, Rome), she began working as an illustrator, collaborating with agencies, Italian and foreign publishing houses (EL, Erikson Edizioni, Rizzoli, Salani, Victionary/Honk Kong, Amaterra/France, QED/United Kingdom, Artebambini), companies (Europe Assistance, Gabs, Bolewine, Pictoom, Miho, RCS, Rai, ILIAD, Michelin, Adidas/NSS Magazine, Lavazza, Cartoon Network and others), newspapers and magazines (Interni, Corriere della Sera, Rolling Stones Magazine, Vita, IoDonna). Between 2016 and 2018 she published three illustrated books: “100 CHEVALIERS”, “ZOOM: The biggest circle ever”, and “5 WILD SHAPES”.
Her outdoor murals can be found in Rome, Milan, Turin, Palermo, Naples, Padua, Bormio, Brescia, Monza, Ravenna, Bologna, Viterbo and in Molise, Marche, Basilicata. She also made interior murals, such as an entire room in the Madama Hostel in Milan, in ILIAD offices in Rome and Milan, in associations, libraries, schools, and playrooms.