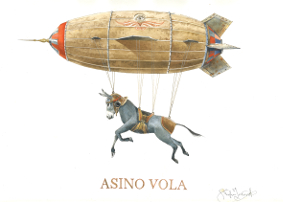 By Concorto29 January 2016No Comments

Realized by Stefano Faravelli, it will be our flagship for the upcoming year.

An early XX century zeppelin, a Prussian pinnacle, a flying donkey and a future-looking Eye of Providence. This is “Asino Vola” (Fly-Donkey), the imaginative poster of Concorto’s 2016 edition drawn by Stefano Faravelli, painter, writer, Orientalist.

Stefano Faravelli
Born in Turin on the 10th of April 1959, he is married and has four children.
Fascinated since early age by drawings, animals, encyclopaedias, Durer and Bosch, he attended the Arts College and the Fine Arts Academy in Turin. He graduated in Oriental Studies and started his painting career with many exhibitions in Italy and abroad.
He traveled extensively in the East and Middle East; his peintre-savant vocation led him to the carnet-du-voyage painting. In 1994 he published “Sindh. Indian notebook” followed by carnets dedicated to China, Mali, Egypt. He developed a strong relationships with the Biennale du Carnet de Voyage of Clermont-Ferrand and since 2004 he is president of the association “Segni dagli Orizzonti” and he’s been busy organizing exhibitions and meetings about journey notebooks.
Brief but significant is his experience as set designer, painter and puppeteer with the “Teatro dei Sensibili” by Guido Ceronetti.
Stefano Faravelli is visiting professor at USI (Università della Svizzera Italiana) and at the Holden School in Turin.