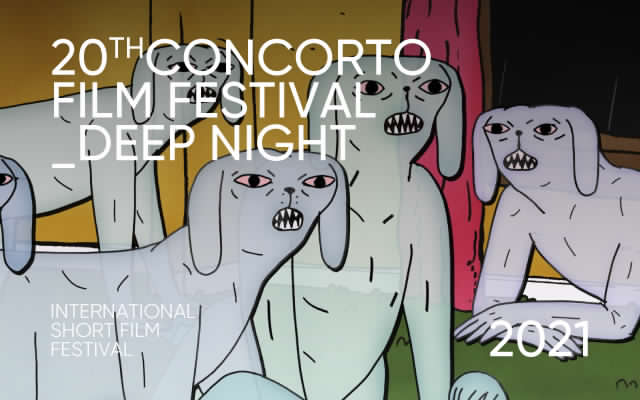 Deep Night is one of the regular features of the Concorto Film Festival, a moment in which the most bizarre and unusual cinema becomes the main character. Born in 2016 as a focus devoted to horror cinema, Deep Night has developed throughout the years, welcoming animation, comedy, and experimental cinema, aiming to recreate the atmosphere of the New York midnight movies screenings, which were born 50 years ago and made famous by artists such as Alejandro Jodorowsky and John Waters. Every year, Deep Night seeks the craziest, weirdest, and most disturbing stories, and tries to give credit to authors who propose a new and personal approach to the film genre. As usual, the evocative Theater-Greenhouse in Parco Raggio will host Deep Night, one of the funniest and most awaited events at Concorto, for three nights. The screening with wireless headphones, thanks to which the experience will be even more immersive and engaging, is also confirmed. Deep Night 2021 will also launch the collaboration with a foreign festival: members of the Festival de Cine de Terror de Molins de Rei, better known as Terror Molins, a historical Catalan festival dedicated to horror and fantasy cinema that celebrates its 40th anniversary this year, will land at Concorto. The Spanish festival will present a selection of horror short films and introduce to the public its own event, which is to take place in November just a few kilometers away from Barcelona. This project will allow Deep Night to get to know new realities and widen its horizons.