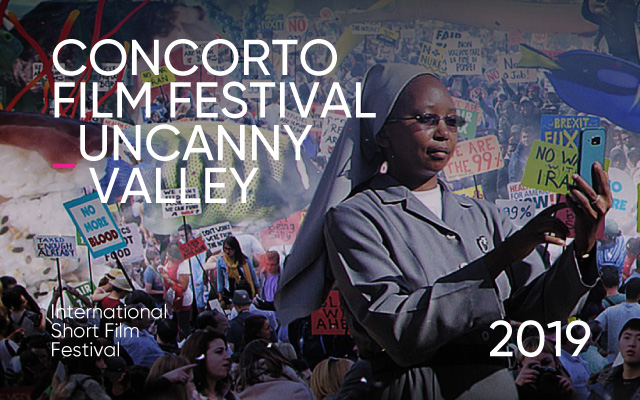 By Concorto26 July 2019No Comments

Curated by Yorgos Kostianis
In 1970, robotics scholar, Masahiro Mori published a research that focused on the, not entirely linear, relationship between humans and anthropomorphic automata. His study found that the sense of empathy of the former towards the latter increased proportionally to the growing resemblance of robots to human features. However, once the robotic representative realism reached an extreme point, he noticed a sharp drop in positive emotional reactions arousing unpleasant sensations such as repulsion and anxiety.
This is the famous “uncanny valley” – which takes its name from the graphic representation of the aforementioned emotional decline. A valley that the film industry is also trying to cross.
In a world where virtual reality is rapidly becoming the norm, cinema is the art that gravitates closest to this concept. From the construction of virtual theatres with special effects, to the creation of curved screens with three-dimensional imagery, to the introduction of interactive films; technology is changing the game, albeit with a certain uncertainty.
The audience keeps oscillating between the consolidated status quo of traditional cinema and the disturbing allure of a future that is coming ever faster.
The purpose of this focus is to try and cross this valley together, through a selection of directors who push the boundaries of traditional cinematography with meta-media films capable of reflecting contemporary society through futuristic and dystopian lenses.
Throughout the exploration of this post-media terrain, our objective will be that of investigating the impact that this filmic event horizon could have on us, and on the future of cinema.