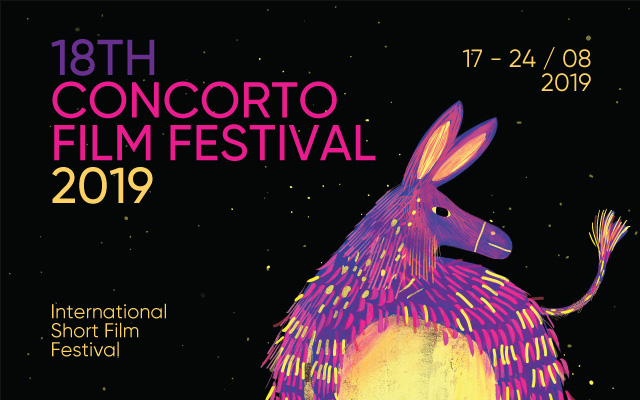 By Concorto28 January 2019No Comments

Cherishing our tradition, Concorto every year assigns the festival poster to a different visual artist. And so we pass from the donkey-prism 2018 of Silvia Idili to the luminescent donkey 2019 of Giovanna Lopalco, aka Pelo di Cane.
The donkey that floats on a giant balloon, an image that will accompany us throughout the coming year, brings to mind a curious analogy. The balloon in its most famous meaning – the aerostatic balloon – was invented by the Montgolfier brothers almost a hundred years before a similar pair of French witty-boys, the famous Lumière brothers, invented the cinema. And this slouching, merry donkey dressed up like a Mexican piñata, is the most apt trait d’union we could imagine. Happily “riding” a shimmering yellow balloon, it seems almost a dreamlike hallucination worthy of Georges Méliès. A donkey that comes from afar, designed in Galicia, one of the westernmost outposts in Europe and that with its calm and light floating takes us farther and further.

Giovanna Lopalco / Pelo di Cane
Born in Mesagne in 1982. She studied animation at the National Cinematography Center of Turin. Since 2009 she has worked as a background artist in several short films and animated feature films such as: “Kérity la maison des contes”, “Pinocchio”, “Sangre de Unicornio”, “Psiconautas”, “Ethel and Ernest”.
As part of an artist’s residency at the “Maison des Auteurs” in Angoulême “, in France, she developed a short film project” Un grain de sable “. Since 2011 she has been living in Spain, in Galicia, where she combines her work in the field of animation with that of author / illustrator.
http://giovannalopalco.tumblr.com
http://www.giovannalopalco.it
www.instagram.com/pelo_di_cane