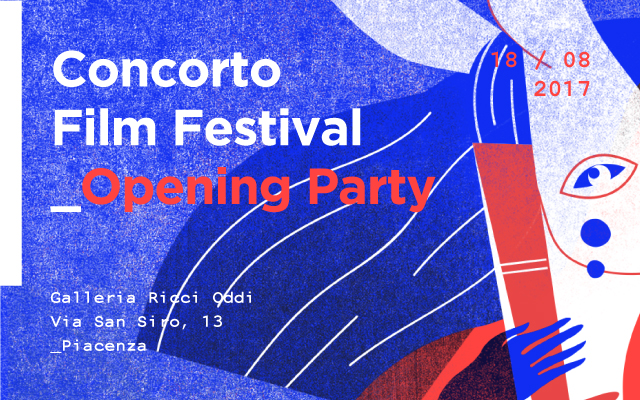 By Concorto2 August 2017No Comments

For the fourth year running, Concorto invites you to its unique Festival Opening Party! Quite some changes from last year; first, we have moved from Palazzo Ghizzoni Nasalli (still our headquarters during the festival!) to the very heart of Piacenza, the Art Gallery – Galleria Ricci Oddi.
Our most welcome guest and protagonist of the night’s concert, together with Laura Bisceglia at cello, will be the musician and composer Teho Teardo, former Concorto’s jury member in 2015. Teardo, author of the scores for great directors such as Paolo Sorrentino and Enda Walsh, will perform a live concert in the cloister of the building, taking advantage of the dusk light. Less is more: after a series of concerts in trio, quartet and larger ensembles, Teho Teardo goes back to duo with cello and baritone guitar. The affinity between these two instruments brings the sound to a minimalistic and essential dimension, connected by electronics. “There is something inexplicable and unfathomable in sound, in its capacity to redefine what surrounds us, in some cases even altering our perceptions” explains Teardo. It is indeed ineffable the music that composes this show in which Teho, together with cellist Laura Bisceglie, will perform some tracks from his renowned theatre’s scores – from the plays “Ballyturk” and “Arlington” by Enda Walsh – and from recent albums such as “Wilder Mann”.
As for the after-party, bring your dancing shoes to keep up with Gigi Proiettile e la sua orchestra and Daddy Bardo dj.
On August the 18, let’s celebrate together the beginning of the sixteenth edition of Concorto Film Festival!

Teho Teardo, an Italian musician and composer, is one of the protagonists of today’s contemporary music scene. Among his numerous collaborations, two albums with Blixa Bargeld, singer of the Einsturzende Neubauten and former guitarist of Nick Cave’s Bad Seeds, and the soundtrack for Enda Walsh’s plays “Ballyturk” and “Arlington” (featuring great contributions from Cillian Murphy, Joe Lally from Fugazi and Lori Goldston, Nirvana’s cellist).
Teho Teardo has won Ennio Morricone’s Award at the Italian Film Fest and both the Ciak d’Oro Award and the David di Donatello for the soundtrack of Paolo Sorrentino’s “Il Divo”. More recently, Teardo has composed the score for Roberto Faenza’s “La verità sta in cielo”, “Il più grande sogno” by Michele Vannucci and “Caffè” by Cristiano Bortone. Thanks to his work in this field, Teardo is today one of the most prestigious film-scores composers of the contemporary Italian scene, having collaborated with Oscar winners Gabriele Salvatores and Paolo Sorrentino, other than Guido Chiesa, Andrea Molaioli, Daniele Vicari, Stefano Incerti, Claudio Cupellini.